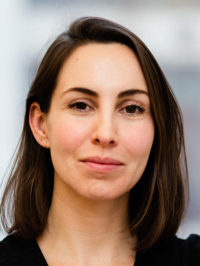 Justine van der Leun is an independent journalist, an Emerson fellow at the New America Foundation, and a reporting fellow at Type Media Center. She is the host, lead reporter, and co-producer of the investigative podcast Believe Her. She is also writing Unreasonable Women: Survival, Punishment, and Mass Incarceration in America, to be published by Ecco, an imprint of HarperCollins. Justine’s prior books include, most recently, We Are Not Such Things, and her features have been published in the New York Review of Books, Harper’s, the Guardian, VQR, and the New Republic, among others. Her journalism has won or been a finalist for the Mike Berger Award, the James Aronson Award, the Sigma Delta Chi Award, and the Silver Gavel Award. Justine has received grants from the Pulitzer Center for Crisis Reporting, Type Investigations, the International Women’s Media Foundation, and the Robert B. Silvers Foundation, as well as fellowships from the Sustainable Arts Foundation, The Justice Collaborative, and PEN America.

A six-part investigative podcast series that looks at one story of criminalized survival.

‘No Choice but to Do It’

Many of the 230,000 women and girls in U.S. jails and prisons were abuse survivors before they entered the system.

A six-month deep dive into the unique experiences of incarcerated women across the US at the beginning of the Covid-19 pandemic.

“I Hope Our Daughters Will Not Be Punished”

From a solitary cell in Texas, Kwaneta Yatrice Harris writes letters documenting the torturous conditions, despite the risk of retribution.

The Evidence Against Her

When Nikki Addimando shot her abusive partner, she thought she had enough proof it was self-defense. Why did the prosecution only see a cold-blooded killer?

Death of a Survivor

In April, Darlene “Lulu” Benson-Seay became the first woman incarcerated by New York State to die from Covid-19. Should she have been in prison in the first place?

A Culture of No

The fate of people seeking asylum in the United States is determined not just by the legitimacy of their claims, but by where they land. This is the story of how one immigration court in Texas has shut the door on those seeking refuge in America.