Mychal Denzel Smith is a fellow at Type Media Center. He is the New York Times bestselling author of Invisible Man, Got the Whole World Watching: A Young Black Man’s Education (Bold Type Books 2016) and a 2017 NAACP Image Award Nominee. His forthcoming book, Stakes Is High, is set to publish with Bold Type Books in 2020.

His work has appeared online and in print for publications such as the Washington Post, the New Republic, the New York Times Book Review, The Nation, the Atlantic, the Paris Review, Complex, GQ, Guernica, Literary Hub, Pitchfork, Buzzfeed, the Guardian, and many others.

He has appeared as a commentator or MSNBC, CNN, Democracy NOW!, NPR, and numerous other national/local radio and television outlets. In 2014 and 2016, TheRoot.com named him one of the 100 Most Influential African-Americans in their annual The Root 100 list.

In Defense of Letting Go of Black Icons (For Now)

I have no interest in being a patriot. I am not concerned with the viability of “America.”
By Mychal Denzel Smith in Esquire.

Incremental Change Is a Moral Failure

What Does It Mean to Defund or Abolish the Police?

Trevor Noah speaks with panelists about the recent progress of the Black Lives Matter movement, the call to defund the police, and community-based alternatives.
Featuring Mychal Denzel Smith and Josie Duffy Rice on The Daily Show.

An NFL player says United ignored his reports of sexual assault. The problem’s bigger than him.

Stereotypes about black men as hypersexual and uniquely violent means that, when they are abused, they regularly face scorn and disbelief.
By Mychal Denzel Smith in NBC Think.

Carmelo Anthony Is Good at His Job

On Melo’s late-career resurgence with the Portland Trai–blazers.
By Mychal Denzel Smith in GQ.

Four writers pay tribute to a great American novelist and groundbreaking intellect.
By Mychal Denzel Smith and others in the New Republic.

Alexandria Ocasio-Cortez Doesn’t Have Time to ‘Learn the Job.’ Neither Did Shirley Chisholm.

Ocasio-Cortez, like Chisholm before her, is driven by an urgency not typically found in American politicians.

By Mychal Denzel Smith in Esquire.

On the burden of the black public intellectual.

Historical Amnesia About Slavery Is a Tool of White Supremacy

Where we have (mostly) condemned slavery, we as a country have refused to condemn its defenders. 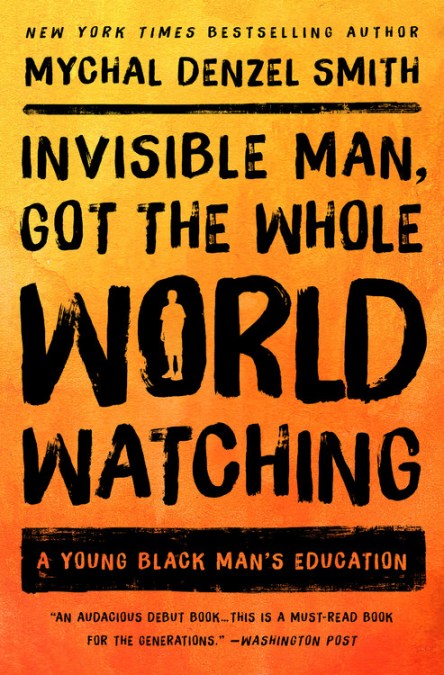 How do you learn to be a black man in America? For young black men today, it means coming of age during the presidency of Barack Obama. It means witnessing the deaths of Oscar Grant, Trayvon Martin, Michael Brown, Akai Gurley, and too many more. It means celebrating powerful moments of black self-determination for LeBron James, Dave Chappelle, and Frank Ocean.

In Invisible Man, Got the Whole World Watching, Mychal Denzel Smith chronicles his own personal and political education during these tumultuous years, describing his efforts to come into his own in a world that denied his humanity. Smith unapologetically upends reigning assumptions about black masculinity, rewriting the script for black manhood so that depression and anxiety aren’t considered taboo, and feminism and LGBTQ rights become part of the fight. The questions Smith asks in this book are urgent–for him, for the martyrs and the tokens, and for the Trayvons that could have been and are still waiting.