Pamela Newkirk, PhD, is a Type Media Center fellow and a professor of journalism at New York University. She is a multi-faceted scholar and journalist whose articles examining race and African American portrayals have appeared in publications including The New York Times, The Washington Post, The Nation and The Guardian. Her forthcoming book, Diversity Inc: The Failed Promise of a Billion-Dollar Business, which examines efforts to diversity American institutions over the past 50 years, publishes from Bold Type Books on October 22, 2019.

Newkirk is author of Spectacle: The Astonishing Life of Ota Benga (Harper Collins 2015), which was listed among the Best Books of 2015 by NPR, the San Francisco Chronicle, the Boston Globe, The Root, and was a New York Times Editors’ Choice. It was also awarded an NAACP Image Award for Outstanding Literature and the Hurston/Wright Foundation Legacy Award. she also edited Letters from Black America (Farrar, Straus & Giroux 2009) and A Love No Less: More Than Two Centuries of African American Love Letters (Doubleday 2004), and wrote Within the Veil: Black Journalists, White Media, (NYU Press 2000) which received a National Press Club Award.

The usual diversity efforts have failed. Let’s take this moment to figure out what can work.
By Pamela Newkirk in the Wall Street Journal.

A white supremacist’s path toward enlightenment on race and tolerance

Book review of Eli Saslow’s “Rising Out of Hatred.” By Pamela Newkirk in the Washington Post.

Yes, you do get wiser and happier after age 50.

Book review of Jonathan Rauch’s “The Happiness Curve: Why Life Gets Better After 50.” By Pamela Newkirk in the Washington Post.

Slavery and the Contradictions of James Madison

While drafting the Constitution, James Madison strove to ensure the protection of minority rights but also proposed that a slave be counted as three-fifths of a person.
By Pamela Newkirk in The Washington Post.

In the 1920s, the Ku Klux Klan experienced a resurgence fueled by the grievances of white populists, conspiracy theories, fake news, skepticism of science, and hostility toward Jews, immigrants and racial minorities.
By Pamela Newkirk in The Washington Post.

For more than a decade, the transformation of blighted urban areas into glistening global beacons for trendy coffee shops and well-heeled whites has commanded national headlines.
By Pamela Newkirk in The Washington Post.

Our March Into Power

The battle ahead is daunting, but for the first time since the election I feel we have a fighting chance to topple tyranny. By Pamela Newkirk in The Nation.

The virulent backlash against President Obama’s 2008 election set the stage for this year’s presidential campaign, in which Muslims, Mexicans and other marginalized groups have been explicitly maligned.
By Pamela Newkirk in The Washington Post.

The Numbing Spectacle of Racism

What the ugly history of a 1906 Bronx Zoo exhibit tells us about ourselves today.

It started as a trickle and has now swelled into a river of prominent African American journalists streaming to black-oriented media. 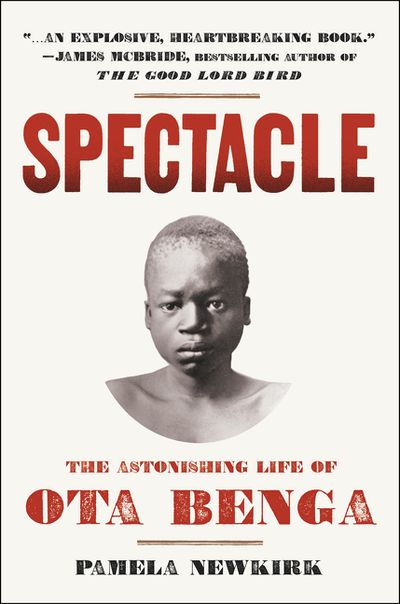 An award-winning journalist reveals a little-known and shameful episode in American history, when an African man was used as a human zoo exhibit—a shocking story of racial prejudice, science, and tragedy in the early years of the twentieth century

In 1904, Ota Benga, a young Congolese “pygmy”—a person of petite stature—arrived from central Africa and was featured in an anthropology exhibit at the St. Louis World’s Fair. Two years later, the New York Zoological Gardens displayed him in its Monkey House, caging the slight 103-pound, 4-foot 11-inch tall man with an orangutan. The attraction became an international sensation, drawing thousands of New Yorkers and commanding headlines from across the nation and Europe.

Spectacle explores the circumstances of Ota Benga’s captivity, the international controversy it inspired, and his efforts to adjust to American life. It also reveals why, decades later, the man most responsible for his exploitation would be hailed as his friend and savior, while those who truly fought for Ota have been banished to the shadows of history.

Thirty years ago, the Kerner Commission Report made national headlines by exposing the consistently biased coverage afforded African Americans in the mainstream media. While the report acted as a much ballyhooed wake-up call, the problems it identified have stubbornly persisted, despite the infusion of black and other racial minority journalists into the newsroom.

In Within the Veil, Pamela Newkirk unmasks the ways in which race continues to influence reportage, both overtly and covertly. Newkirk charts a series of race-related conflicts at news organizations across the country, illustrating how African American journalists have influenced and been denied influence to the content, presentation, and very nature of news.