Sarah Jaffe is a Type Media Center reporting fellow and an independent journalist covering the politics of power, from the workplace to the streets. She is the author of, Work Won't Love You Back: How Devotion to Our Jobs Keeps Us Exploited, Exhausted and Alone (2021), which Jane McAlevey called "a multiplex in still life; a stunning critique of capitalism, a collective conversation on the meaning of life and work, and a definite contribution to the we-won’t-settle-for-less demands of the future society everyone deserves," and of Necessary Trouble: Americans in Revolt (2016), both from Bold Type Books. Her work has appeared in The New York Times, The Nation, the Guardian, the Washington Post, The New Republic, the Atlantic, and many other publications. Sarah was formerly a staff writer at In These Times and the labor editor at AlterNet. She was a contributing editor on The 99%: How the Occupy Wall Street Movement is Changing America, from AlterNet books, as well as a contributor to the anthologies At the Tea Party and Tales of Two Cities, both from OR Books, and Nasty Women: Feminism, Resistance, and Revolution in Trump's America, from Picador. She was also the web director at GRITtv with Laura Flanders. She was one of the first reporters to cover Occupy and the Fight for $15, has appeared on numerous radio and television programs to discuss topics ranging from electoral politics to Superstorm Sandy, from punk rock to public-sector unions. She has a master's degree in journalism from Temple University in Philadelphia and a bachelor's degree in English from Loyola University New Orleans. Sarah was born and raised in Massachusetts and has also lived in South Carolina, Louisiana, Colorado, New York and Pennsylvania.
Recent Work

Who Cares? Before Covid-19, American Women Were Already in Crisis

This was the year that everyone discovered that caring is actually hard work.
By Type Fellow Sarah Jaffe for The Baffler .

Type Talk: Why Is Doing What You Love A Recipe for Disaster?

A conversation with Type Fellows and authors Sarah Jaffe and Gary Younge as they unpack Jaffe’s recent book, WORK WON’T LOVE YOU BACK.

Interview: Sarah Jaffe, Author of “Work Won’t Love You Back,” on Labor and Exploitation.

Jaffe has covered workers’ struggles and the nature of work for over a decade and is one of labor’s leading voices.
By Kim Kelly in Teen Vogue.

Chuckie Denison fought the closure of a GM factory in Lordstown, Ohio — now, he’s devoted himself to challenging the President’s lies about America’s economic recovery.
By Sarah Jaffe in The Progressive.

U.S. Capitalism Is in Total Meltdown

The COVID-19 pandemic is like Hurricane Katrina, but for the entire country. And things are only going to get worse.
By Sarah Jaffe in The Progressive.

As the housing crisis deepens, renters find strength in solidarity.
By Sarah Jaffe in The Progressive.

“Injury to All” at Rutgers University

A coalition of unions representing 20,000 workers is organizing to reject the university’s austerity response to the pandemic.
By Sarah Jaffe in Dissent.

The city’s leaders bungled the closing of the schools when the coronavirus struck. Can they be trusted to reopen them safely?
By Sarah Jaffe in The Nation.

The Union Drive at the Philadelphia Museum of Art

“Amplifying our concerns about going back to work,” says museum educator Sarah Shaw, “is also a way of amplifying the concerns of other frontline workers.”
By Sarah Jaffe in Dissent. 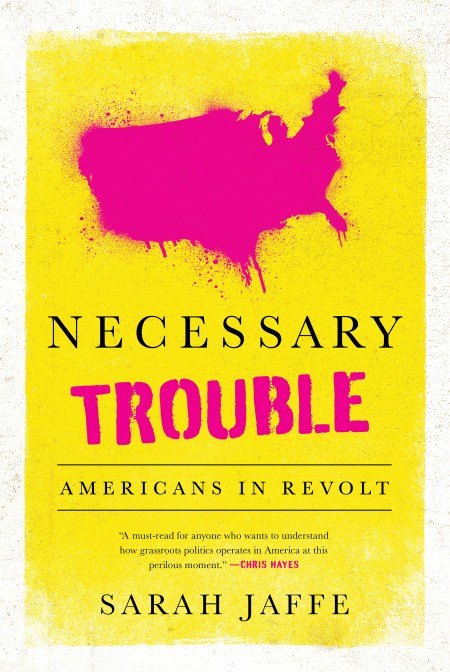 Necessary Trouble is the definitive book on the movements that are poised to permanently remake American politics. We are witnessing a moment of unprecedented political turmoil and social activism. Over the last few years, we’ve seen the growth of the Tea Party, a twenty-first-century black freedom struggle with BlackLivesMatter, Occupy Wall Street, and the grassroots networks supporting presidential candidates in defiance of the traditional party elites. Sarah Jaffe leads readers into the heart of these movements, explaining what has made ordinary Americans become activists. As Jaffe argues, the financial crisis in 2008 was the spark, the moment that crystallized that something was wrong. For years, Jaffe crisscrossed the country, asking people what they were angry about, and what they were doing to take power back. She attended a people’s assembly in a church gymnasium in Ferguson, Missouri; walked a picket line at an Atlanta Burger King; rode a bus from New York to Ohio with student organizers; and went door-to-door in Queens days after Hurricane Sandy.