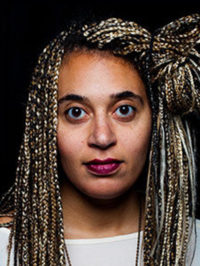 Collier Meyerson is a Knobler Fellow at Type Media Center and a contributor at WIRED Magazine and New York Magazine. She received an Emmy for her work on MSNBC’s All In with Chris Hayes and has won two awards from the National Association of Black Journalists for her writing. Her work has also appeared in The New Yorker, Glamour, n+1, and The New York Times Magazine, among others.

Teaching is a calling for New York’s king of the marketing flier, whose students include the former governor David Paterson. But he won’t take just anyone.

Where Have All the Flowers Gone?

My days have been spent inside mostly. But when I’m out for my daily walk, I delight in seeing flowers in the park by my apartment.

As the novel coronavirus continues to ravage New York City, doulas have had to adapt their methods.

Texts From Politicians Could Be More Dangerous Than Ever

With rallies and canvassing on ice, 2020 election campaigns are rapidly turning to peer-to-peer texting, which isn’t the panacea it appears to be.

Is This the End of Oversharing?

The internet has been reshaped by a fresh anxiety over posting — and revealing — too much.

Burning down capitalism, one incense stick at a time.

The VSCO girls who rise to the top of my feed are a new version of an enduring image of piousness and demureness as the ultimate ambition.