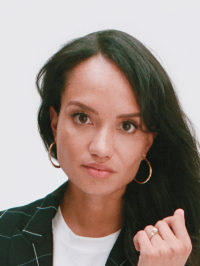 Josie Duffy Rice is a lawyer, journalist, essayist, and fellow at Type Media Center, as well as one of the nation’s leading experts on the power of the prosecutor’s office and prosecutorial misconduct. Josie has been focused on criminal justice reform for over ten years. In that time, she’s worked for some of the leading reform organizations including The Bronx Defenders, the Advancement Project, the Center for Court Innovation, the Center for Popular Democracy, and the Justice Collaborative. A graduate of Harvard Law School, much of her advocacy work has focused on voting rights and criminal justice policy. In 2015, she began reporting on prosecutors for Daily Kos, where she was the only national reporter focused exclusively on prosecutors in the nation.

Currently, she’s an interim co-host of What a Day, Crooked Media’s daily news podcast. She is also the creator and co-host of the podcast Justice in America. Until May 2021, she was President of The Appeal, a news publication that publishes original journalism about the criminal justice system. Her writing has been featured in The New York Times, Vanity Fair, The New Yorker, The Atlantic, and Slate, among others. She was a writer on the FX show The Premise. Josie was also a consulting producer for Campside Media’s Suspect, which recently hit #1 on the podcast charts.

Fault Lines investigates the case of Almeer Nance, convicted of felony murder for an armed robbery he took part in as a 16-year-old in 1996. He received a sentence of 51 years and has no meaningful opportunity to have a second chance in life to reconnect with his family.

For “51 Years Behind Bars,” a new documentary from Al Jazeera English’s “Fault Lines,” correspondent Josie Duffy Rice and producer Jeremy Young interviewed Nance and other people connected to his case to learn more about the consequences of his lengthy sentence.

What Does It Mean to Defund or Abolish the Police?

Trevor Noah speaks with panelists about the recent progress of the Black Lives Matter movement, the call to defund the police, and community-based alternatives.

In 1996, Michele Benjamin was sentenced to life without parole for killing a man who she said solicited her for sex and menaced her with a weapon in New Orleans. A Supreme Court decision led her to be re-sentenced to life with a chance at parole in 2016. Today, a parole hearing brings the possibility of freedom.

How to Punish Voters

Cyrus Vance and the Myth of the Progressive Prosecutor

The Gospel According to Pusha T

The artist raps about cocaine with effortless dexterity. But in lionizing the antics of the dealer, he fails to fully comprehend the life of an addict.