Joe Conason is a fellow at Type Media Center and Type Investigations’ editor-at-large. For 18 years he wrote a weekly political column for The New York Observer, where he formerly served as executive editor, and for 12 years he wrote a weekly column for Salon. He is now editor-in-chief of The National Memo, a daily political newsletter and website. He previously served as investigative editor of The American Prospect, editor-at-large for Condé Nast’s Details, and as a staff writer for The Village Voice. His articles and essays have appeared in Harpers, Esquire, The Nation, The New Republic, The Guardian, and The New Yorker, among scores of other periodicals. A winner of The New York Press Club’s Byline Award, he has covered every American presidential election since 1980.

They’ve Showed Us Who They Are

The assault on the Capitol inspired by President Trump was a tragic event, but it illuminated the national landscape like a flash.
By Joe Conason in The National Memo.

For The Generals, A Duty To Speak Up Now

So far nobody in the United States military has expressed great surprise over President Trump’s alleged remarks about soldiers who made the ultimate sacrifice.
By Joe Conason in The National Memo.

What No Patriot Would Ever Do

“Performative patriotism” is a fancy way of describing what my father called “jelly-bellied flag flappers.”
By Joe Conason in The National Memo.

What The Pandemic Tells Us About Our Politics

When Americans are confronting the most threatening national crisis in a generation, it would be uplifting to offer a few encouraging words about the president.
By Joe Conason in The National Memo.

The Evidence That Trump Concealed

The accumulating evidence of impeachable offenses by President Donald J. Trump is overwhelming.
By Joe Conason in The National Memo.

Now House Republicans Hate The Rules They Made

America lost a great leader with the passing of Rep. Elijah Cummings (D-MD).
By Joe Conason in The National Memo.

Boris Johnson suffered a historic defeat on Tuesday — a humiliation that no prime minister has suffered since 1894 — and watched his razor-thin majority evaporate.
By Joe Conason in the National Memo.

For Democrats, Mueller Isn’t The Problem

Robert Mueller’s testimony disappointed anyone seeking drama, but his performance isn’t the problem.
By Joe Conason in the National Memo.

The Opposite of Patriotism

The right enjoys no monopoly on patriotism — and on this Fourth of July, their grotesque fealty to Trumpism will prove the point again.
By Joe Conason in the National Memo.

Amid the ongoing uproar over Mitt Romney’s snooty remarks at a Florida fundraiser concerning the “47 percent” who pay no federal income taxes, the party’s high-rolling host hasn’t drawn quite the attention as he deserves.

'Kiss My Ass': Fear And Loathing In The Romney Campaign

If there is one thing this three-country tour has proved, it is that Mitt Romney’s handlers cannot trust him to cope with unscripted questions.

What's Holding Up The Zadroga Bill?

To understand the depths of shame and cynicism in the partisan stalling of health legislation for 9/11 first responders, it is only necessary to recall how eagerly Republican politicians once rushed to identify themselves with New York City’s finest and bravest. 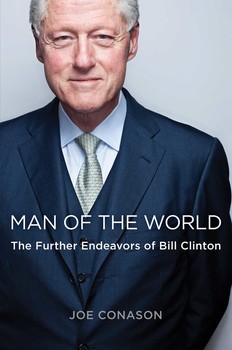 Man of the World: The Further Endeavors of Bill Clinton

Veteran political journalist Joe Conason brings you along with Bill Clinton, as the forty-second president blazes new paths in his post-presidential career.

It Can Happen Here: Authoritarian Peril in the Age of Bush

For the first time since the Nixon era, Americans have reason to doubt the future of democracy. Today, to an unprecedented degree, big government conspires with big business and big evangelism, while civil liberties are diminished and war is promoted by taxpayer-funded ideologues, raving pundits, and religious zealots. Could we be headed toward an age of authoritarianism?

Big Lies: The Right-Wing Propaganda Machine and How It Distorts the Truth

In Big Lies, Joe Conason rips through the ten most damaging lies perpetrated by the right wing propaganda machine. Big Lies confronts right-wing slander and bias with a long-awaited, badly-needed counterpunch to the deceptions that have plagued American politics for a generation.