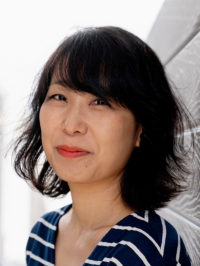 E. Tammy Kim is a freelance reporter, essayist, a contributing opinion writer at The New York Times and a Type Media Center Fellow. She is also a co-host of the Time to Say Goodbye podcast, a contributing editor at Lux magazine, and a 2022 Alicia Patterson fellow. She is working on a book about the U.S.–South Korea military relationship.

A Welcome Unfreedom in South Korea

Quarantining with my mother in her homeland, I questioned the U.S. approach to the pandemic and public health.
E. Tammy Kim  The New Yorker

Do Today’s Unions Have a Fighting Chance Against Corporate America?

For the workers who haven’t joined the Great Resignation, this moment has inspired a new wave of organizing — and a brutal pushback.

Rising panic over housing costs and a misogynist backlash culminated in the election of a new strongman president in South Korea.

Two hundred thousand South Korean children have been adopted since the Korean War. Adoptee memoirs, once full of confession and confusion, are now marked by confidence and rage.

China and the Lore of American Manufacturing

In Ohio’s Senate race, both candidates are employing anti-Asian rhetoric and neglecting to hold corporations to account.