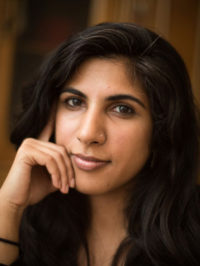 Rozina Ali is a fellow at Type Media Center, and a contributing writer at New York Times Magazine. Her reporting and essays on the Middle East, the War on Terror, and Islamophobia in the United States have appeared in The New Yorker, The Nation, The Guardian, The New York Times, Al Jazeera America, Foreign Policy, Los Angeles Review of Books, and others. She was on the editorial staff of The New Yorker from 2015 to 2019, and was previously a senior editor at The Cairo Review of Global Affairs based in Cairo, Egypt.

Rozina Ali speaks with the New Yorker about her reporting from Afghanistan’s women’s shelters.

Susan B. Glasser The New Yorker

The poet Solmaz Sharif takes a certain pleasure from the scene at airports when flights are delayed and the people around her are frustrated and tired. “I have a sense of, ‘Welcome. Welcome to how I feel all the time,’” she told me this past December.

She changed the Israeli-Palestinian debate in Congress by reminding her colleagues of the human stakes. It’s a burden she would rather not carry.

The ISIS Beat​: Why Caliphate and Everyone Else Got It Wrong

We owe the countries we’ve invaded and bombed more than such a narrow lens of the world, a lens we’ve created.

The ‘Herald Square Bomber’ Who Wasn’t

After 9/11, U.S. authorities used informants to secure hundreds of terror convictions. But did they help create plots where none existed?

Rewriting the Story of the Palestinian Radical

In “Against the Loveless World,” Susan Abulhawa presents a tale that has less to do with ideology than with the way love binds us to land.

Keeping the Bronx fed in the midst of a pandemic.
Rozina Ali Harper's

The Iraq War Paved the Way for Coronavirus Catastrophe

In early April, a video of an elderly woman in what looks to be a makeshift isolation ward in Iraq circulated widely on WhatsApp.

A Hunger Strike in ICE Detention

Ajay Kumar, an asylum seeker from India, went on a hunger strike to protest the “animal-like treatment” he faced in ice custody.

Trump’s policy is no longer in the spotlight, but the ban on visitors from Muslim-majority countries is still separating American families.

For many Kashmiris, the media’s persistent focus on the India-Pakistan binary misses a key part of the story.

The United Nations, ostensibly the only international organization that can provide aid to people in Rukban, is beholden to states that have little incentive to help the people living there.

One struggling town in California has relied on oil and prisons to revive its economy. Now it’s turning to marijuana.